This year at ArtFest I was lucky enough to take a workshop with one of my favorite artists
Theo Ellsworth. Out of all of the workshops I signed up for, this one terrified me the most. Armed with a pencil, a few pens and a blank sheet of paper, I was sent on an expedition into the unknown territory of my imagination. Why would this terrify me when I create things all the time? Mostly because I'm accustomed to creating something out of something. Assemblage, collage, sculpting, sewing... but in Imaginary School you are being asked to create something from the intangible realms of thought and imagination. This was a slightly painful process for me. Enough so that I gave myself a headache and felt exhausted by the end of class. That being said, the whole experience was amazing in that I managed to blaze a trail into a whole new realm where I met my imaginary self. At first I thought I was meeting this self for the first time, but soon realized that I knew this self already. Somewhere between childhood and adulthood, I had lost my imaginary self and eventually forgot all about her. Now she and I have a lot of catching up to do and experiences to share! 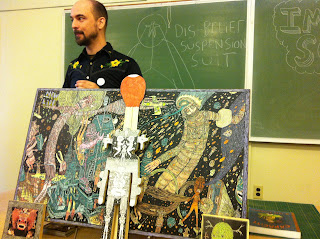 So... after introducing ourselves to the ghost of an Ancient Multi-Dimensional Earth Native (thats the pale guy standing in front of the large match) and lighting said match with our imaginations, we were asked to draw our imaginary selves wearing a Mind Technology Powered Dis-Belief Suspension Suit. 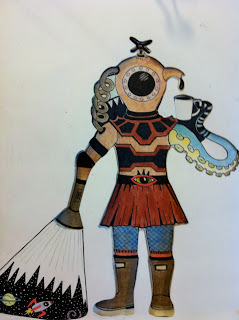 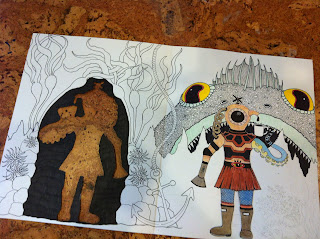